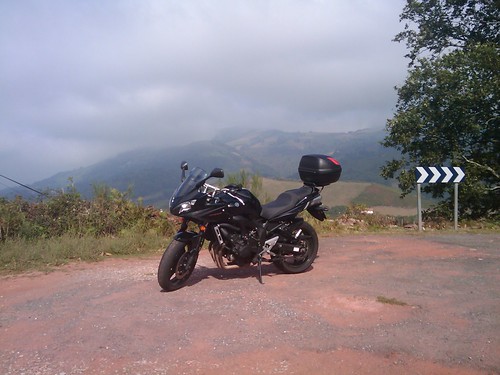 As I mentioned in a previous post, I recently took a “where the wind blows me” vacation in France, and I’m gonna tell you about that wind.

I started out my trip in Bordeaux, where I found a pretty nice hotel to be my ‘base of operations’ whilst I tried to work out my motorcycle rental. I managed to find the website and then the physical location of Bordeaux Scooters, and this is where I rented the motorcycle for one whole week.

For the first day, I just rode around the city of Bordeaux a very little bit, trying to accustom myself to the Yamaha Fazer 650 (since I normally ride a Kawasaki Ninja 500).

On my first full day on the bike, I got out of Bordeaux and hit a bunch of secondary (C and D) roads. I hit places like Biscarosse(-en-Plage), Mimizan, and Léon, before I stopped for the night in Hasparren where I stayed at a cute Hôtes de Chambre (Bed & Breakfast). I was feeling pretty good and confident, both in my motorcycling ability and my language ability to operate in the hinterlands of France.

For my second day of riding, I figured I’d take some more scenic roads, and even cross over the Spanish border for a bit. I made it through the border just fine, and was cheerfully enjoying the nice big sweeping roads on the way to Elizondo, and then turned on the road towards Erratzu to make my way back into France near Saint-Etienne-de-Baïgorry.

It was just after a hairpin turn, not more than 1km from the French border and the summit of the hill. I noticed the old stone barn on the left side of the road, then I looked uphill and contemplated that I should be careful because of all the mountain mist that was probably making the road slippery. I brought my attention back to the road, and was alarmed to find that I had drifted close to the side of the road. I started to panic. I was so worried about the side of the road that I couldn’t look away, and motorcyclists know that’s exactly where I ended up.

I am lucky because I had just recently come out of a tight turn and I wasn’t going all that fast. I landed face down with my torso on the pavement, and did only about 1 ½ horizontal pirouettes before I came to a rest. While the helmet I was wearing was scraping across the pavement, I remember thinking “Boy, a helmet is a really good idea!”

I was up in an instant, just in time to see that the hard case (holding most of my possessions) rolling down the hill. In my adrenaline-addled mind, I decided that I really needed to get my stuff back. So, I went careening down the side of the mountain in my full gear. I found the case 1 ½ switchbacks down. I brought it up to the road (1 full switchback below the motorcycle) and only then did I decide to take off some of my gear and inspect for damage. Other than a little bit of scuffed up skin, I was actually fine.

As I was walking back up to inspect the bike, a younger French guy in a car stopped to give me a hand. He helped me turn the bike over, and point it away from downhill. He told me he expected insurance (assurance in French) could be found in any town, and that they’d have me set back up in no time. I thanked him for his help and advice, and sent him on his way, while I figured out what I needed to do.

After I got all my stuff assembled, and took a couple of pictures, I sat down and tried to call the rental shop. I ended up calling Ryan (in the U.K) for some research help because I didn’t know what the country-code is for France. After we got that figured out, I realized the rental shop was on their stated lunch break until 2PM. (It had just turned about 12:30PM.) I sat there for a bit trying to keep myself calm and counting my lucky stars. After I changed into some less-sweaty and warmer clothes, I decided that I should try to get to ‘civilization’, preferably on the French side of the border since the motorcycle was rented from France.

Eventually a nice (German?) couple on motorcycles stopped to give me a hand. We were formulating an elaborate me-plus-my-stuff-on-their-bikes plan, when I realized it was a bit soon for me to be riding on a motorcycle again. I got them to help me flag down a passing carpenter, who agreed to take me and my stuff in his truck to the mechanic’s in Saint-Etienne-de-Baïgorry. The local mechanic was of no help, other than trying to help me call the rental shop again, which I knew was still closed. After he basically told me to go away because he didn’t deal with motorcycles and he was on his lunch break, I walked towards town center and sat on the steps of a hotel/brasserie that was also closed for lunch. I decided to wait out the remaining hour or so until the rental shop opened up by chilling out and reading my Kindle on those steps.

Once I did get the rental shop on the phone, they told me that I needed to get the bike transported back to Bordeaux (250km) by whatever means necessary. The shop owner offered to see if he could find someone to do it, and I said I’d look around at my end. After our conversation, I had no idea if I would be stuck in the town of Saint-Etienne-de-Baïgorry overnight, but I figured I’d check into the hotel until things settled, and if I had to leave early, I could just lump one night’s charge.

As I was checking into

Hotel Juantorena, I mentioned (or whined) to Mélanie (who I later found out was one of the owners) that I had just been in a motorcycle accident and needed to find a truck to bring the broken motorcycle back to Bordeaux. She said that her husband might be able to help me out. Bixente came out from the kitchen, and called around to some truck services in Biarritz, and found me a quote of €1,200. I thanked him and said I would call back to Bordeaux to see if the rental place had found me a better quote. The rental place said to call back in a couple of hours because the friend they were going to ask was out at the moment and it would be a while before they got an answer.

It turns out that Bixente is also a motorcyclist, and offered to take me (after he finished setting up his kitchen for the evening) to pick up the motorcycle on his motorcycle trailer to bring it down (the 10 km) to his hotel parking lot. I was kind of amazed at this, but just went with it after the day I was having. About a ½ hour later, after I had washed off some of my road rash, he called me down to the front of the hotel where he, his truck, and his motorcycle trailer were waiting for me. He drove me up to the crash spot where we loaded up the wreck, and brought it back to the hotel.

The ride up and back could have been horrible. But after figuring out my French skills needed just a bit of annunciation and a slower pace, Bixente actually took the time to get to know me. We had a really nice conversation, and I’ve come to look back upon that conversation as one of the nicest moments during my time in France.

After getting back to the hotel, I called the rental shop to tell them that the bike was now in the parking lot. In addition to the location of the bike, we had some (mis-)communication where I thought they said to wait several more hours to verify that the truck from Bordeaux would be interested in the job. So, I took a little nap, then read some more whilst having a beer in the bar. I was really surprised when Bixente told me the truck driver was at the other end of town and would be arriving soon. (Evidently, when I thought the rental shop was telling me that I was waiting for confirmation, they were actually telling me that I was waiting for the arrival of the truck.)

The truck driver, myself, and Bixente loaded up the bike into the truck. It was now about 8 or 9PM, and the driver hadn’t eaten, and neither had I, so we had dinner at the restaurant. The driver was kind of gruff, and not all that friendly, but I managed to get some small-talk in. After dinner, using Bixente as a patient go-between, we established that it was best if I went with the truck driver back to Bordeaux with the bike. (I didn’t realize there was more for me to do there.) So, I checked out of the hotel. I tried to convince Mélanie to keep my room charge, but she wouldn’t hear of it. She insisted that if I weren’t staying overnight they wouldn’t even think about keeping my money.

The driver brought be back to Bordeaux, and dropped me off at midnight at a hotel right near the rental shop. The next day, I went to the rental shop to find out that we were waiting for a verdict from the motorcycle repair shop. When I remembered that I hadn’t yet paid the driver from the evening before, the rental shop owner called him for the price. Since I was paying in cash for the truck ride, it only came out to €500, which is a great deal compared to the other quotes I had received.

Later that afternoon, the verdict came down that the bike’s frame was bent and therefore “totaled”. I went back over to the rental shop to sign the credit card slip for the €1800 security deposit that I had now forfeited. And thus ends my motorcycle adventure in France.

Now, people say all sorts of horrible things about the French. In general, I can tell you that much of this is wrong. In specific, I can tell you that Mélanie and Bixente are some of the warmest and most caring people I’ve ever run into in my travels. They took the time to patch up and help this stupid American with bad French and even worse motorcycle skills, and not ask for anything in exchange, other than an email greeting at some time in the future. I hugged Mélanie and Bixente fiercely, and I left their hotel with tears in my eyes because I felt really fortunate to have met these beautiful people.

Doing Them A Solid

In addition to adding Mélanie and Bixente to my Xmas card list, I have decided to send as many people as I can to them. So, if any of you readers are ever interested in a quaint village in the beautiful Basque region of France, might I suggest Hotel Juantorena? Also, spreading this info to motorcyclists far & wide would be much appreciated.

(I will try to scan in their pamphlet, but in the mean time, here’s their contact info:) t

Their pamphlet shows that they have a website (http://www.hotelrestaurantjuantorena.fr) but it doesn’t seem to be working?